Manuka honey is made from the flowers of the wild Manuka shrub that grows wild in the wild and uncultivated areas of New Zealand. The concentration of methylglyoxal (MG) in Manuka honey determines its marked healing properties. 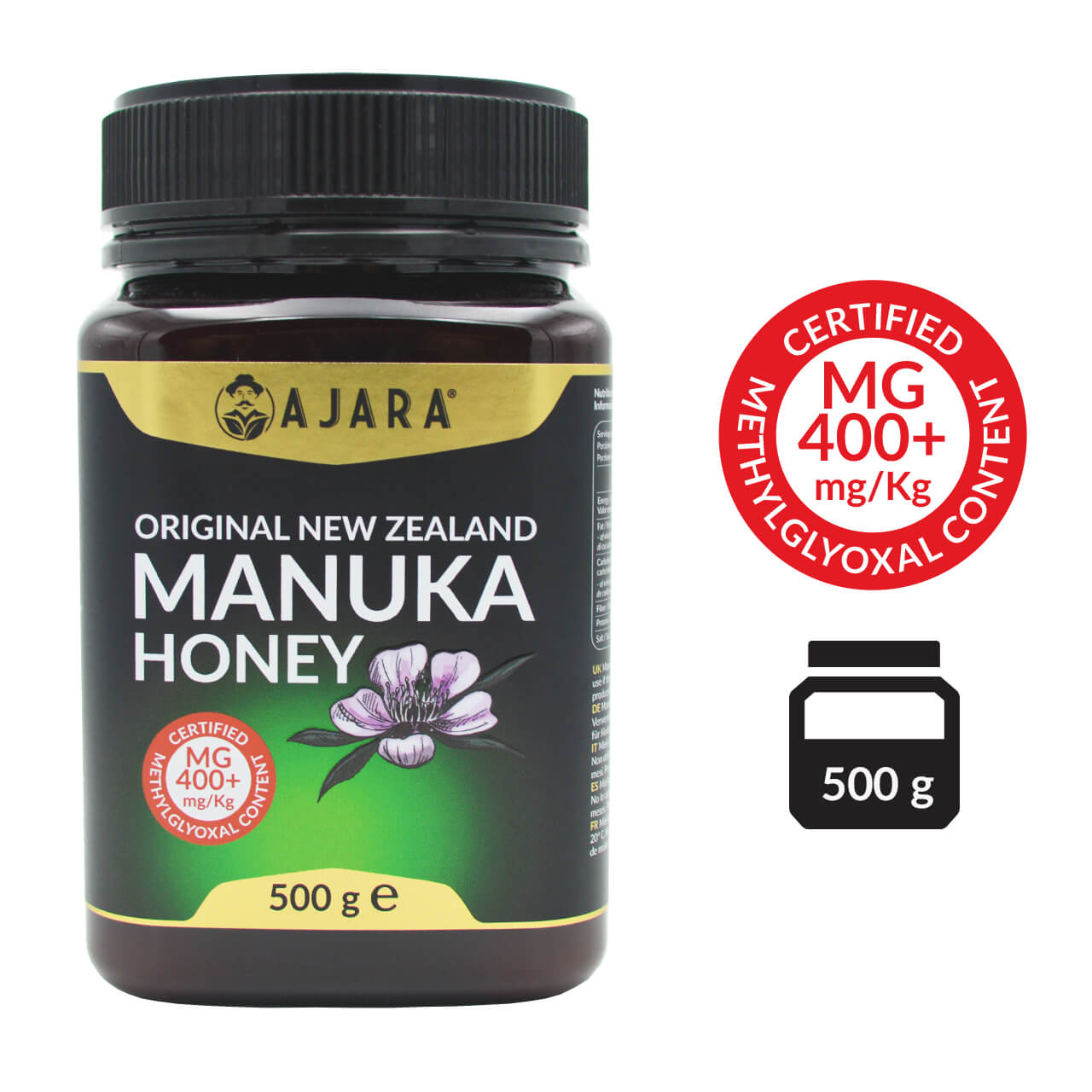 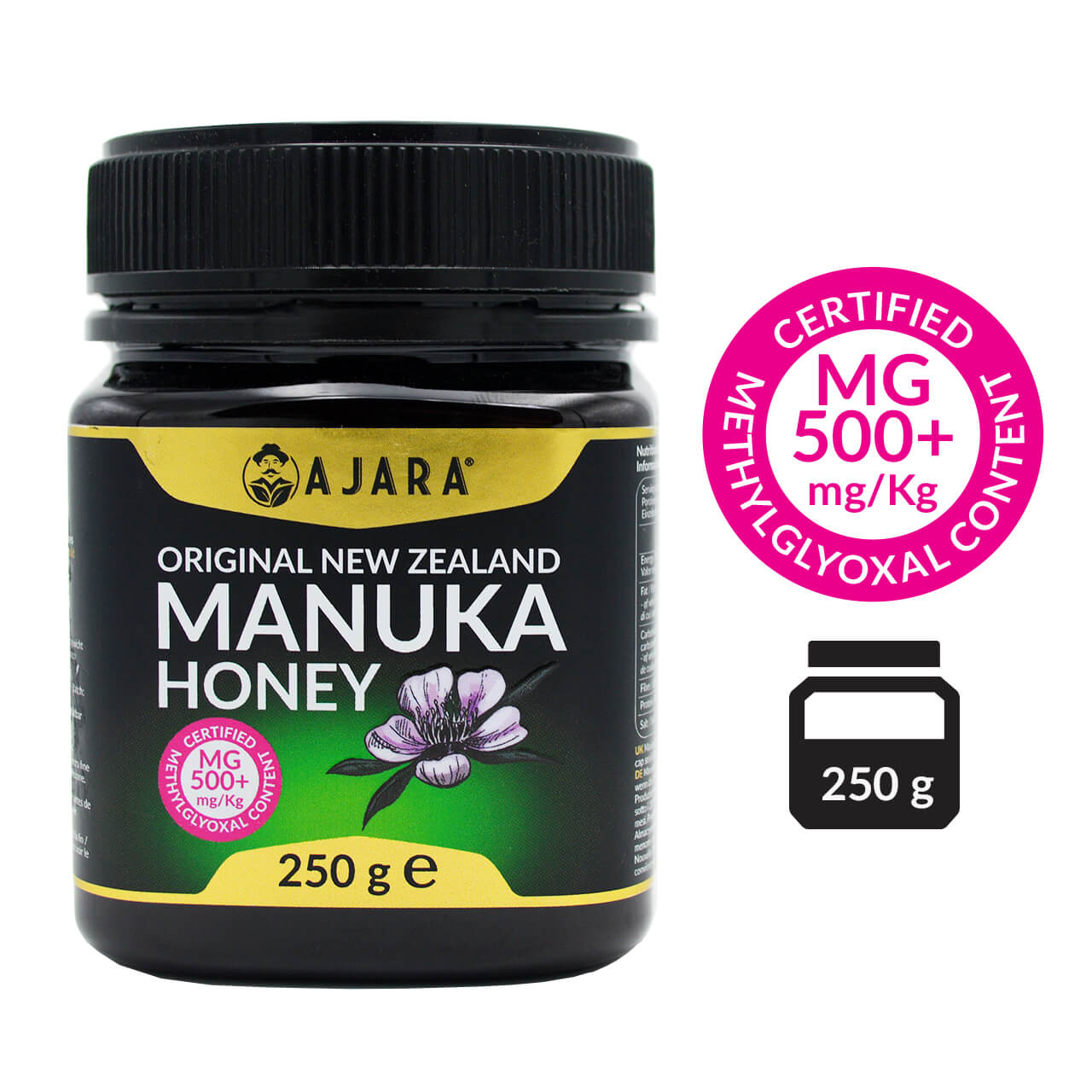 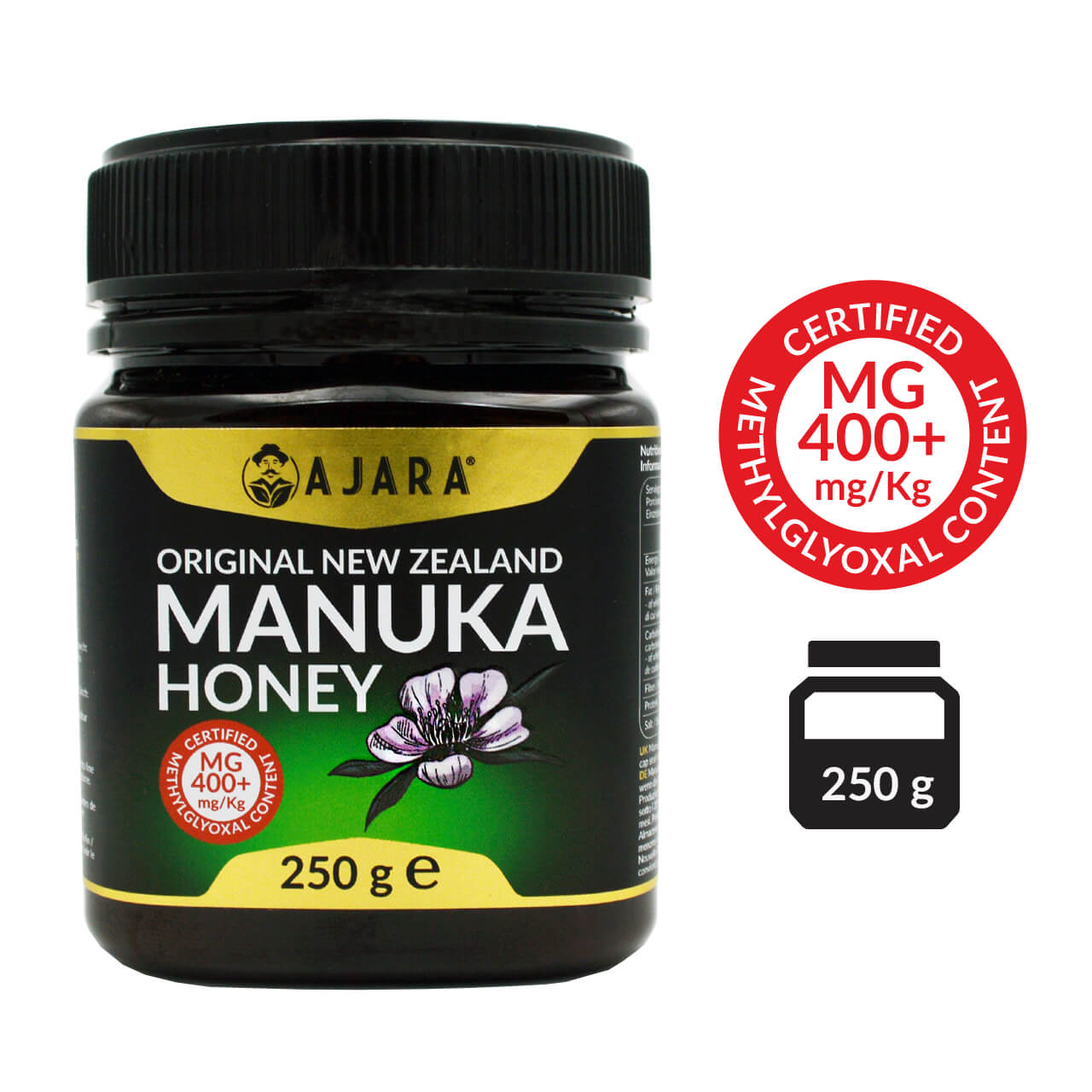 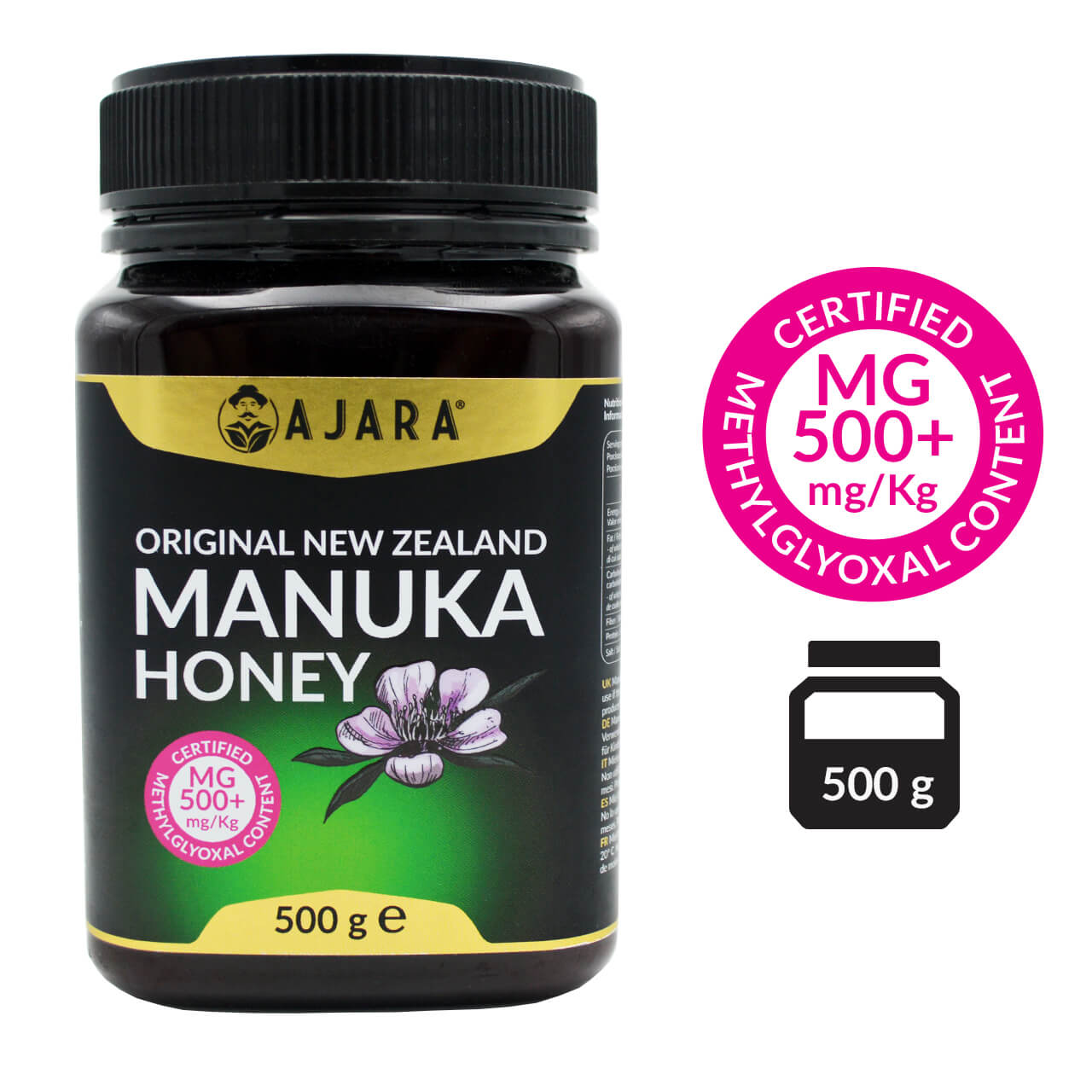 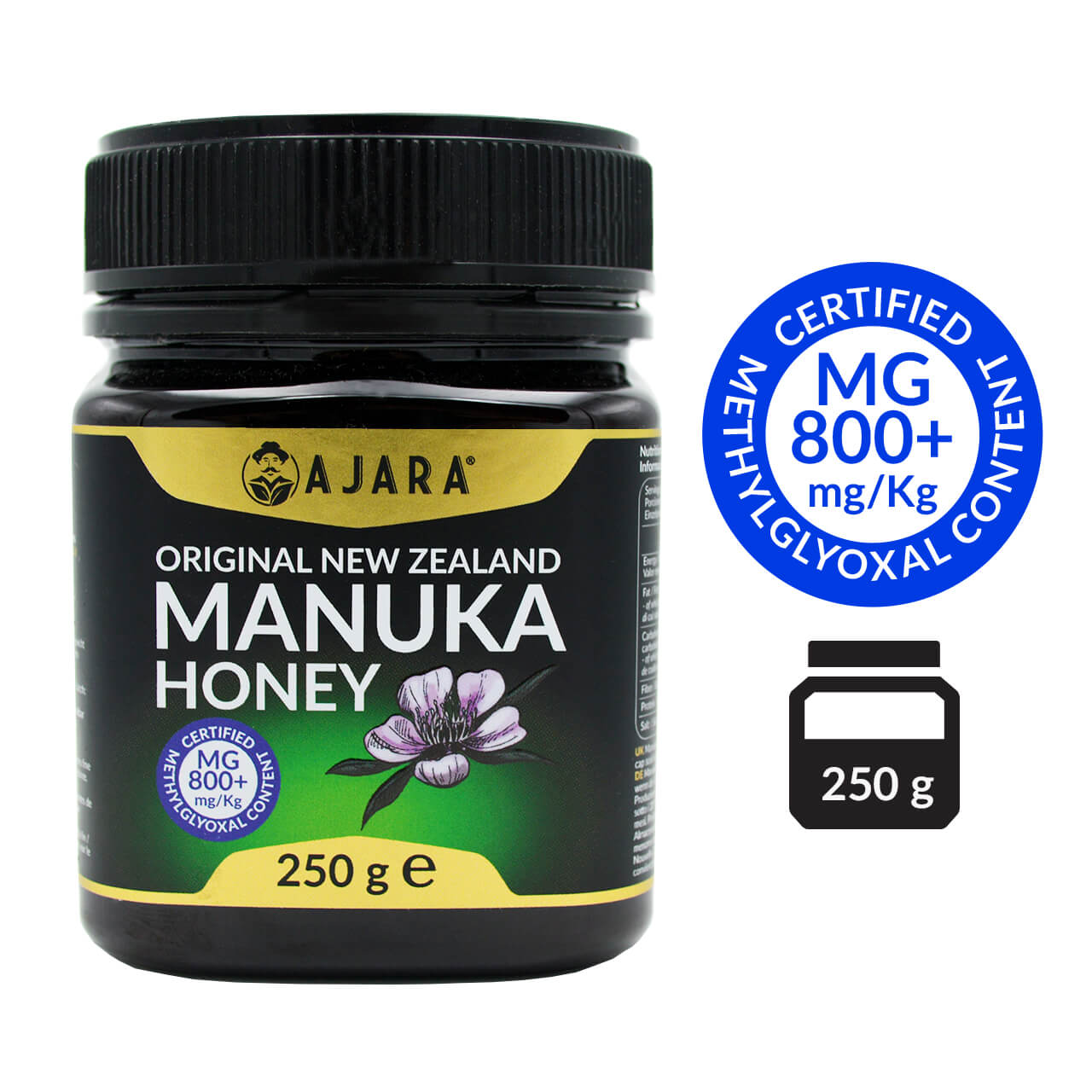 Manuka, do you want to learn more? What is Manuka Honey?

Manuka honey is obtained from the flowers of the homonymous plant (Leptospermum Scoparium) that grows in remote areas of New Zealand in the form of sapling or wild shrub for more than 80 million years. It is precisely by virtue of this isolation that the Manuka plant had to develop a nectar with antibacterial, antifungal and antibiotic properties which, by improving the health of the insects and other animals that fed on it, guaranteed the success and cyclicality of the pollination process .

The first to discover the beneficial effects were even the Maori who for centuries have used it as a natural antidote in the treatment of wounds, ulcers and burns and as a curative food for infections, the problems of the respiratory tract and the gastro-intestinal tract.

We have selected 3 concentrations of MG

Manuka AJARA honey uses the MG (MGO) classification system with a range of products ranging from MG400 + to MG800 +. A higher concentration of MGO corresponds to a higher level of antibiotic, anti-inflammatory and antibacterial activity. This choice is due to the greater precision, reliability and repeatability found in the MGO system compared to the UMF.

Certified AJARA honey has been analyzed and tested for its Methylglyoxal level in an accredited New Zealand laboratory, as requested by the Ministry of Primary Industries of New Zealand (MPI), and is validated with a laboratory certificate for each batch produced.

Manuka AJARA is pure, free of additives, preservatives, harmful substances and additives of any kind, including sucrose and inverted sugars.

Pure, raw and unfiltered 100% honey harvested at Bay of Plenty, an island in northern New Zealand, where bees create their golden goodness from the island's generous and varied flora.

100% natural food with recognized antibacterial qualities. Natural remedy for some intestinal tract diseases, it heals wounds and accelerates the anti-inflammatory and healing process. It is recommended to take it raw or in the yougurt.

The unique therapeutic properties of Manuka

It was from 1980 that, thanks to a series of increasingly frequent studies, the cause of the antibacterial activity of Manuka was discovered and validated.

The pronounced antibacterial, antifungal and antibiotic activity of this therapeutic honey is due to the action of Methylgloxal (Methylglyoxal - MGO), a compound derived from pyruvic acid, which is the result of the conversion of dihydroxyacetone naturally present in high concentration in Manuka flowers: the concentration of MGO in Manuka honey is 100 times higher than in traditional honey.

In all the honeys, in fact, there is an enzyme secreted by bees, glucose-oxidase, which, introduced into our body, turns into hydrogen peroxide with a high antimicrobial action which, however, quickly extinguishes when it is subjected to the conditions for which the Methylglyoxal (MGO) remains highly stable and active. In 2008, the research group led by Professor T. Henle of the University of Dresden, Germany, published among the results of having "demonstrated for the first time without ambiguity that Methylglyoxal is directly responsible for the antibacterial activity of Manuka honey" . (Source: Molecular Nutrition and Food Research, January 2018)

Certified Manuka honey is the only food known so far to contain Methylglyoxal in significant quantities.

According to research by Dr. Dee Carter of the University of Sydney's School of Molecular and Microbial Biosciences "Manuka Honey kills more bacteria than all available antibiotics." Source: The New Zealand Journal of Natural medicine.

Methylglyoxal alone binds to proteins and DNA and is toxic to human cells; however when it is contained in honey it is able to kill the bacterial cells without damaging the human ones and it does so by deploying a power that correlates to the quantity present in the honey: finding out what is the synergistic effect with the other components that underlies this behavior pharmacological is the goal of current research on Manuka honey.

BECAUSE YOU
CAN TRUST AJARA

Shipping in 24/48 h through Amazon Logistics

We have processed more than 10,000 online orders in the last year on Amazon, Ebay, Facebook and the Website.

Do you have doubts, are you looking for advice?
Write us an email to info@ajara.it or a WhatsApp on the number 3775258636